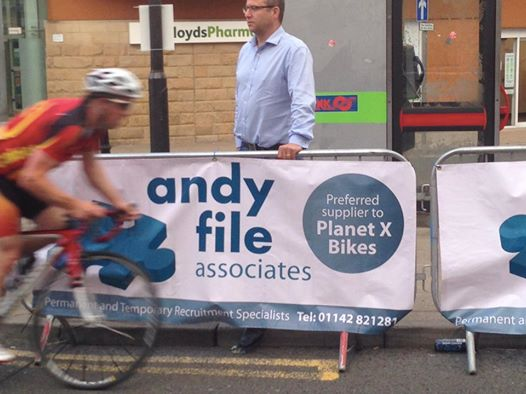 THE TEAM GEAR UP TO SPONSOR CHARITY CYCLE RACE

As Team Cystic Fibrosis took to their saddles and rode through the streets of Barnsley, the team cheered on from behind the banners, proud to sponsor this year’s Barnsley Bike race for Cystic Fibrosis.

The team were delighted to sponsor the Barnsley Criterium on 24 June, kicking off the town’s Tour de France Grand Depart celebrations.

AFA were joined by hundreds of spectators who lined the streets to watch the race. The Barnsley Criterium was the first cycling race to be held in the heart of the town for nearly 20 years and was brought back on track by Barnsley’s charity cycling squad, Team Cystic Fibrosis.

Andy File Associates sponsored the race alongside client, Planet X. It was the first of two races the two businesses will be sponsoring this year. On 14 September the team are sponsoring the 65 Roses Holme Moss Classic. In aid of cystic fibrosis, the cycle ride begins with a mass start from the Magna Science Centre near Rotherham and down through the rolling hills of Yorkshire.