As riders prepared to ride through the rolling hills of South Yorkshire including the ascent of the iconic Holme Moss, part of the 2014 Tour de France’ journey through Yorkshire, our team was there to support them over the finishing line.

The team were delighted to sponsor the 65 Roses Holme Moss Classic which was held on Sunday 14th September 2014.

The long route is 65 miles with approximately 6000 feet of climbing. The short route rides most of the same route, just avoiding the ride through Holmfirth and over Holme Moss.

Both races started and finished at Magna Science Adventure Centre in Rotherham.

“We seek to keep the costs to a minimum through the generous help of our sponsors and supporters. All profits from this event go to supporting the fight against Cystic Fibrosis.” 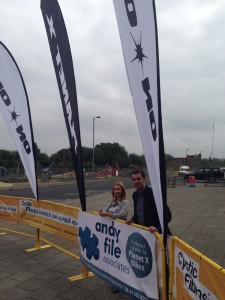